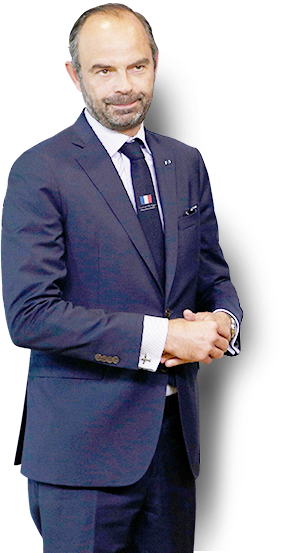 From November 1 to November 4, 2018, the Prime Minister of the Republic of France, Édouard Philippe, had an official visit to Vietnam on the occasion of the 45th anniversary of establishing diplomatic relations and 5 years of the strategic partnership between France and Vietnam.

Accompanying the Prime Minister were Ms. Agnès Buzyn, Minister of Solidarity and Health; Mr. Gérald Darmanin, Minister of Public Action and Accounts, and many elected representatives and business leaders in France.

The Prime Minister also went to Dien Bien Phu to honor the veterans and to commemorate at the Monument of France and Vietnam martyrs cemetery.

The Prime Minister also had a meeting with Secretary of Ho Chi Minh City’s Central Party Committee – Nguyen Thien Nhan and shared the startup story, the competitiveness of people in the robot era and showed expectations about the French – Vietnamese startup community.

Returning 30 days ago, Nhasilk received an offer to make a silk tie to give a special guest. The offer came from a Facebook account with no information. Our counselor asked once again to identify the needs of the customers: “Who is your very special guest? The clearer the information, the more accurate Nhasilk will meet the needs.” “The Prime Minister of France,” the customer answered.

The situation was quite serious, so the information was transferred to higher levels, and finally, Nhasilk’s CEO was the one who spoke with the customer. Customers’ needs are “very simple”: making a tie by traditional Vietnamese silk material, demonstrating the quintessence of traditional crafts of our country and expressing the friendship between Vietnam – France. After agreeing to the request, the Nhasilk’ s CEO asked why he chose Nhasilk, and the customer replied, “I learn a lot of brands and eventually choose yours. The reason is very simple. We feel the message from your slogan: Real silk. Real value “.

Nhasilk quickly got to work.

Silk is woven by hand so it is difficult to avoid errors, however, our product quality control (QC) department always strictly inspects imported silk raw to ensure that the tie will be completed completely. If there is an error then the naked eye can hardly distinguish. However, that time the process of QC was changed, we not only had to find the most complete silk but also had to find in the entire material storage of 5 completely unblemished silk sheets. Only with this seemingly simple task, 3 people from the QC department took two full working days to meet the requirements

The above 5 silk sheets were immediately transferred to the design and cut department to “transform” into 5 silk ties in accordance with European standards. This stage is quite fast, it only took a day because the tie tailors in Nhasilk are all skilled workers.

The third stage is really hard: embroidering the French flag, name, and position of the Prime Minister. Hand embroidery on ordinary fabrics was difficult, embroidery on silk was much harder. Silk is very difficult to shape, the embroidery lines must ensure that the stitches are small and even, creating gentle and elegant handwriting. Inexperienced embroiders could not make work on silk, so Nhasilk had to go to the skilled artisans in the field of hand embroidery to complete this stage and it took 7 days to complete 5 hand-embroidered silk ties as required.

After the 5 ties returned to the back-office, an emergency meeting was conducted. The meeting consisted of CEO, Creative Director, Marketing Director, Production Manager, design staff, and the best sales staff of Nhasilk discussing to choose the most beautiful and perfect tie of the 5 ties.

Finally, it took eleven days to make a hand-embroidered silk tie for the French prime minister.
But it had not stopped yet. This is a diplomatic gift for the head of the French government, it contains the thousand-year cultural mark of Vietnam, it is a bridge to connect closer the relationship of the two countries. Therefore, the packaging of this gift continues to cause headaches for the entire Nhasilk people.

After many options, we decided to use a box to store the tie. The box is made of precious wood with a faint scent, the outside is covered with genuine leather and carved with the national flags of the two countries Vietnam – France, the inside is covered with soft velvet fabric.

Until this time, the gift was truly fulfilling.

We wait every day to see the French Prime Minister, to be honored to present a gift containing Vietnamese national pride and friendship.

And that moment had come …

That afternoon there were more than 150 guests including the French business community in Vietnam, the French Tech startup club and a large number of startup entrepreneurs and of course, Nhasilk’s representative. We were excited waiting for the Prime Minister!

Then, Prime Minister Edouard Philippe also appeared. He was so tall, dressed in a well-tailored suit. He smiled and nodded at everyone. Ms. Nguyen Phi Van, the representative of the startup community, presented about the startup ecosystem in Vietnam, then two startup groups were invited to sit with the Prime Minister to tell their story.

One of them, who is also a member of the executive board of the French Tech startup club, said: “The organizers told me absolutely not to give you presents. But everyone chose this tie, embroidered the French flag along with your name”.

He smiled again, reached over to grab the tie and said, “I like surprises and I like to be with young people.” Then he put up the tie and continued: “Remember to watch TV, you will see me wearing the tie.“

And starting from here, a completely new product is on shelves in Nhasilk. The product was given a very formal name: the Prime Minister’s Tie.

The Prime Minister of the Republic of France Édouard Philippe was born on November 28, 1970, in Rouen. He graduated from the University of Political Science in 1992; graduated from ENA École Nationale d’Administration in 1997.