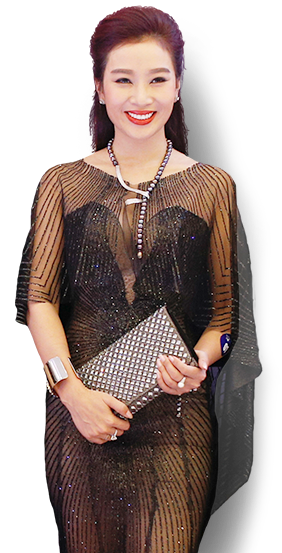 On October 19, 2018, at Adora Luxury, there was a celebration to celebrate the 10th anniversary of the publication of Business Style Magazine, as well as the launching event of the Top 100 International Business Style 2018 – 2019 voting program. The activity is led by World Lady Runner-up Nguyen Thu Huong, who is the head of the organizing committee to engage and support branding for businesses.

For Nhasilk, this ceremony marks the first combination of the company’s silk tie and scarves with the latest collection from two designers who own splendid suits in the Vietnam fashion: Sy Hoang and Angela Ngo. Additionally, we also take on the role of sponsor and providing gifts for guests attending the event.

At the exhibition area of Nhasilk products that day, we received a lot of congratulations and attention from guests and journalists. But one of the guests that left us the deepest impression was runner-up Thu Huong. When she saw the silk scarves, she “admitted” that she was attracted to them – “I was really impressed with the designs, all are unique and highlighting Vietnamese traditions.”. Carefully looking at each product, interested in their meaning and cultural story, she must also be a silk lover.

After putting down the terraced fields scarf, she said: “The market has many events, the most difficult is probably the belief of consumers with Vietnamese silk. I believe that, with all the enthusiasm of those who built the true Vietnamese silk brand, Nhasilk will bring quality silk products and earn the trust of consumers.” Runner-up of World Lady – Thu Huong took a photo with Nhasilk silk scarf The harmony of the soul and the thinking of people who have the same love with silk, her words help us to be stronger on the journey to realize the purpose and the mission to restore the silk weaving villages nationwide, bringing Vietnamese silk back to its original position and value.

Although knowing the road is not really easy to go but we – Nhasilk people will not stop because the thought we get that always will be Real silk – Real value. Thank you very much to runner-up Thu Huong for the trust that she has for Nhasilk in particular and for Vietnamese silk in general.

Nguyen Thu Huong was born in 1979. She got the title of Miss Sports at the age of 16 and most recently was the second runner-up in the Miss World Lady of 2011 competition.

She used to do a lot of jobs such as MC, business-woman, actress, journalism, etc. But people remember her the most as the host of the 21st Century Woman and Getting Rich Is not Difficult on VTV3.

Suddenly turning to the market, setting up a business. Over time, she became a successful entrepreneur and became known as the CEO of a media company, the president of the International Women’s Leadership Network in Vietnam, and the president of a specialized training institute creating a professional image for business leaders and brand strategy consultants.